An endophenotype approach to the genetics of alcohol dependence: a genome wide association study of fast beta EEG in families of African ancestry. 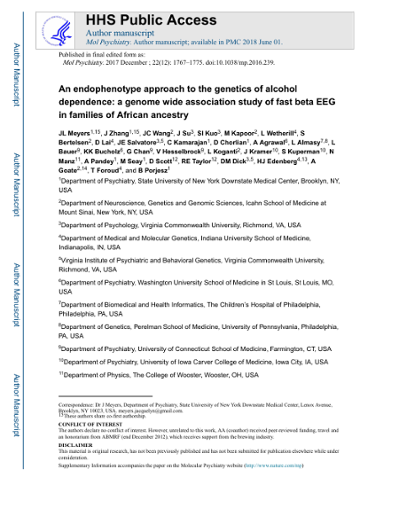 Fast beta (20-28 Hz) electroencephalogram (EEG) oscillatory activity may be a useful endophenotype for studying the genetics of disorders characterized by neural hyperexcitability, including substance use disorders (SUDs). However, the genetic underpinnings of fast beta EEG have not previously been studied in a population of African-American ancestry (AA). In a sample of 2382 AA individuals from 482 families drawn from the Collaborative Study on the Genetics of Alcoholism (COGA), we performed a genome-wide association study (GWAS) on resting-state fast beta EEG power. To further characterize our genetic findings, we examined the functional and clinical/behavioral significance of GWAS variants. Ten correlated single-nucleotide polymorphisms (SNPs) (r>0.9) located in an intergenic region on chromosome 3q26 were associated with fast beta EEG power at P<5 × 10. The most significantly associated SNP, rs11720469 (β: -0.124; P<4.5 × 10), is also an expression quantitative trait locus for BCHE (butyrylcholinesterase), expressed in thalamus tissue. Four of the genome-wide SNPs were also associated with Diagnostic and Statistical Manual of Mental Disorders Alcohol Dependence in COGA AA families, and two (rs13093097, rs7428372) were replicated in an independent AA sample (Gelernter et al.). Analyses in the AA adolescent/young adult (offspring from COGA families) subsample indicated association of rs11720469 with heavy episodic drinking (frequency of consuming 5+ drinks within 24 h). Converging findings presented in this study provide support for the role of genetic variants within 3q26 in neural and behavioral disinhibition. These novel genetic findings highlight the importance of including AA populations in genetics research on SUDs and the utility of the endophenotype approach in enhancing our understanding of mechanisms underlying addiction susceptibility.