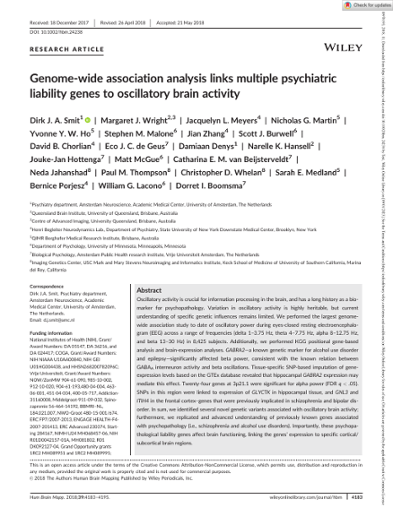 Oscillatory activity is crucial for information processing in the brain, and has a long history as a biomarker for psychopathology. Variation in oscillatory activity is highly heritable, but current understanding of specific genetic influences remains limited. We performed the largest genome-wide association study to date of oscillatory power during eyes-closed resting electroencephalogram (EEG) across a range of frequencies (delta 1-3.75 Hz, theta 4-7.75 Hz, alpha 8-12.75 Hz, and beta 13-30 Hz) in 8,425 subjects. Additionally, we performed KGG positional gene-based analysis and brain-expression analyses. GABRA2-a known genetic marker for alcohol use disorder and epilepsy-significantly affected beta power, consistent with the known relation between GABA interneuron activity and beta oscillations. Tissue-specific SNP-based imputation of gene-expression levels based on the GTEx database revealed that hippocampal GABRA2 expression may mediate this effect. Twenty-four genes at 3p21.1 were significant for alpha power (FDR q < .05). SNPs in this region were linked to expression of GLYCTK in hippocampal tissue, and GNL3 and ITIH4 in the frontal cortex-genes that were previously implicated in schizophrenia and bipolar disorder. In sum, we identified several novel genetic variants associated with oscillatory brain activity; furthermore, we replicated and advanced understanding of previously known genes associated with psychopathology (i.e., schizophrenia and alcohol use disorders). Importantly, these psychopathological liability genes affect brain functioning, linking the genes' expression to specific cortical/subcortical brain regions.

Except where otherwise noted, this item's license is described as © 2018 The Authors Human Brain Mapping Published by Wiley Periodicals, Inc.