The Genetic Relationship Between Alcohol Consumption and Aspects of Problem Drinking in an Ascertained Sample. 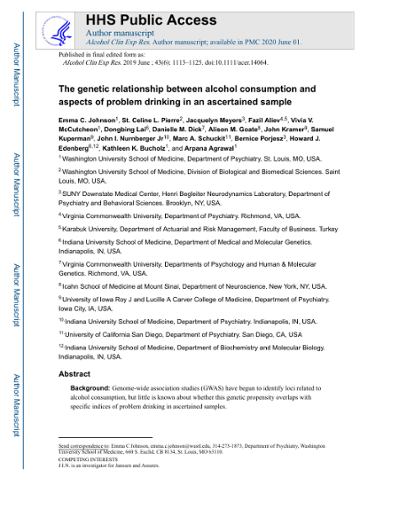 Background: Genomewide association studies (GWAS) have begun to identify loci related to alcohol consumption, but little is known about whether this genetic propensity overlaps with specific indices of problem drinking in ascertained samples. Methods: In 6,731 European Americans who had been exposed to alcohol, we examined whether polygenic risk scores (PRS) from a GWAS of weekly alcohol consumption in the UK Biobank predicted variance in 6 alcohol-related phenotypes: alcohol use, maximum drinks within 24 hours (MAXD), total score on the Self-Rating of the Effects of Ethanol Questionnaire (SRE-T), DSM-IV alcohol dependence (DSM4AD), DSM-5 alcohol use disorder symptom counts (DSM5AUDSX), and reduction/cessation of problematic drinking. We also examined the extent to which an single nucleotide polymorphism (rs1229984) in ADH1B, which is strongly associated with both alcohol consumption and dependence, contributed to the polygenic association with these phenotypes and whether PRS interacted with sex, age, or family history of alcoholism to predict alcohol-related outcomes. We performed mixed-effect regression analyses, with family membership and recruitment site included as random effects, as well as survival modeling of age of onset of DSM4AD. Results: PRS for alcohol consumption significantly predicted variance in 5 of the 6 outcomes: alcohol use (Δmarginal R2 = 1.39%, Δ area under the curve [AUC] = 0.011), DSM4AD (Δmarginal R2 = 0.56%; ΔAUC = 0.003), DSM5AUDSX (Δmarginal R2 = 0.49%), MAXD (Δmarginal R2 = 0.31%), and SRE-T (Δmarginal R2 = 0.22%). PRS were also associated with onset of DSM4AD (hazard ratio = 1.11, p = 2.08e-5). The inclusion of rs1229984 attenuated the effects of the alcohol consumption PRS, particularly for DSM4AD and DSM5AUDSX, but the PRS continued to exert an independent effect for all 5 alcohol measures (Δmarginal R2 after controlling for ADH1B = 0.14 to 1.22%). Interactions between PRS and sex, age, or family history were nonsignificant. Conclusions: Genetic propensity for typical alcohol consumption was associated with alcohol use and was also associated with 4 of the additional 5 outcomes, though the variance explained in this sample was modest. Future GWAS that focus on the multifaceted nature of AUD, which goes beyond consumption, might reveal additional information regarding the polygenic underpinnings of problem drinking.

Except where otherwise noted, this item's license is described as © 2019 by the Research Society on Alcoholism.