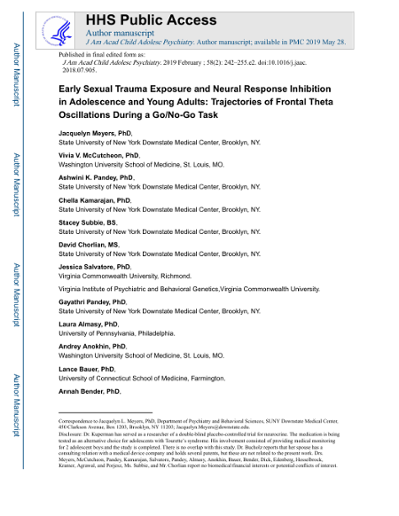 Journal of the American Academy of Child and Adolescent Psychiatry

Objective: Trauma, particularly when experienced early in life, can alter neurophysiologic and behavioral development, thereby increasing risk for substance use disorders and related psychopathology. However, few studies have empirically examined trauma using well-characterized developmental samples that are followed longitudinally. Method: The association of assaultive, non-assaultive, and sexual assaultive experiences before 10 years of age with developmental trajectories of brain function during response inhibition was examined by measuring electrophysiologic theta and delta oscillations during no-go and go conditions in an equal probability go/no-go task. Data were drawn from the Collaborative Study of the Genetics of Alcoholism (COGA) prospective cohort, composed of offspring who were aged 12 through 22 years at enrollment from high-risk and comparison families, with follow-ups at 2-year intervals since 2004. In addition, other important predictors of neurophysiologic functioning (eg, substance use, impulsivity, and parental alcohol use disorders) were investigated. Moreover, associations of neurophysiologic functioning with alcohol and cannabis use disorder symptom counts and externalizing and internalizing psychopathology were examined. Results: Individuals exposed to sexual assaultive trauma before 10 years of age had slower rates of change in developmental trajectories of no-go frontal theta during response inhibition. Importantly, effects remained significant after accounting for exposure to other traumatic exposures, such as parental history of alcohol use disorder and participants' substance use, but not measures of impulsivity. Further, slower rates of change in no-go frontal theta adolescent and young adult development were associated with increased risk for alcohol use disorder symptoms and internalizing psychopathology, but not for cannabis use disorder symptoms or externalizing psychopathology. Conclusion: Childhood sexual assault is associated with atypical frontal neurophysiologic development during response inhibition. This could reflect alterations in frontal lobe development, synaptic pruning, and/or cortical maturation involving neural circuits for inhibitory control. These same areas could be associated with increased risk for young adult alcohol use disorder symptoms and internalizing psychopathology. These findings support the hypothesis that changes in neurocognitive development related to early sexual trauma exposure could increase the risk for mental health and substance use problems in young adulthood.

Except where otherwise noted, this item's license is described as Copyright © 2019. Published by Elsevier Inc.