Association of Polygenic Liability for Alcohol Dependence and EEG Connectivity in Adolescence and Young Adulthood. 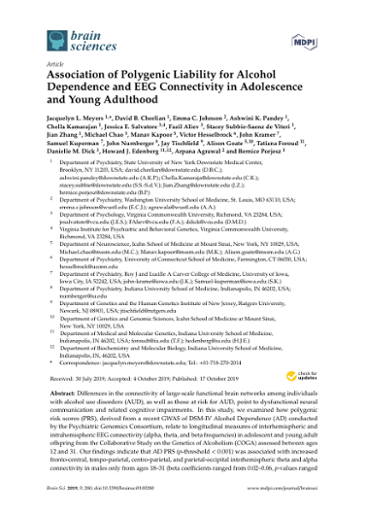 Differences in the connectivity of large-scale functional brain networks among individuals with alcohol use disorders (AUD), as well as those at risk for AUD, point to dysfunctional neural communication and related cognitive impairments. In this study, we examined how polygenic risk scores (PRS), derived from a recent GWAS of DSM-IV Alcohol Dependence (AD) conducted by the Psychiatric Genomics Consortium, relate to longitudinal measures of interhemispheric and intrahemispheric EEG connectivity (alpha, theta, and beta frequencies) in adolescent and young adult offspring from the Collaborative Study on the Genetics of Alcoholism (COGA) assessed between ages 12 and 31. Our findings indicate that AD PRS (-threshold < 0.001) was associated with increased fronto-central, tempo-parietal, centro-parietal, and parietal-occipital interhemispheric theta and alpha connectivity in males only from ages 18-31 (beta coefficients ranged from 0.02-0.06, -values ranged from 10-10), but not in females. Individuals with higher AD PRS also demonstrated more performance deficits on neuropsychological tasks (Tower of London task, visual span test) as well as increased risk for lifetime DSM-5 alcohol and opioid use disorders. We conclude that measures of neural connectivity, together with neurocognitive performance and substance use behavior, can be used to further understanding of how genetic risk variants from large GWAS of AUD may influence brain function. In addition, these data indicate the importance of examining sex and developmental effects, which otherwise may be masked. Understanding of neural mechanisms linking genetic variants emerging from GWAS to risk for AUD throughout development may help to identify specific points when neurocognitive prevention and intervention efforts may be most effective.