Polygenic contributions to alcohol use and alcohol use disorders across population-based and clinically ascertained samples. 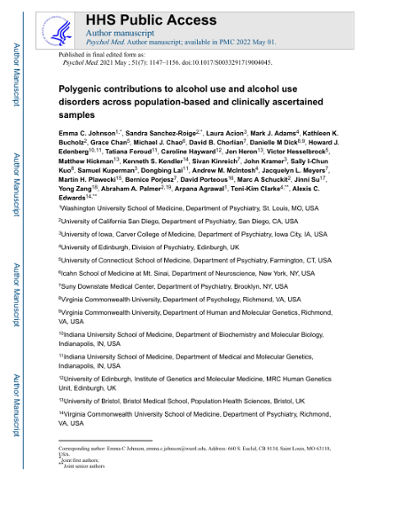 Background: Studies suggest that alcohol consumption and alcohol use disorders have distinct genetic backgrounds. Methods: We examined whether polygenic risk scores (PRS) for consumption and problem subscales of the Alcohol Use Disorders Identification Test (AUDIT-C, AUDIT-P) in the UK Biobank (UKB; N = 121 630) correlate with alcohol outcomes in four independent samples: an ascertained cohort, the Collaborative Study on the Genetics of Alcoholism (COGA; N = 6850), and population-based cohorts: Avon Longitudinal Study of Parents and Children (ALSPAC; N = 5911), Generation Scotland (GS; N = 17 461), and an independent subset of UKB (N = 245 947). Regression models and survival analyses tested whether the PRS were associated with the alcohol-related outcomes. Results: In COGA, AUDIT-P PRS was associated with alcohol dependence, AUD symptom count, maximum drinks (R2 = 0.47-0.68%, p = 2.0 × 10-8-1.0 × 10-10), and increased likelihood of onset of alcohol dependence (hazard ratio = 1.15, p = 4.7 × 10-8); AUDIT-C PRS was not an independent predictor of any phenotype. In ALSPAC, the AUDIT-C PRS was associated with alcohol dependence (R2 = 0.96%, p = 4.8 × 10-6). In GS, AUDIT-C PRS was a better predictor of weekly alcohol use (R2 = 0.27%, p = 5.5 × 10-11), while AUDIT-P PRS was more associated with problem drinking (R2 = 0.40%, p = 9.0 × 10-7). Lastly, AUDIT-P PRS was associated with ICD-based alcohol-related disorders in the UKB subset (R2 = 0.18%, p < 2.0 × 10-16). Conclusions: AUDIT-P PRS was associated with a range of alcohol-related phenotypes across population-based and ascertained cohorts, while AUDIT-C PRS showed less utility in the ascertained cohort. We show that AUDIT-P is genetically correlated with both use and misuse and demonstrate the influence of ascertainment schemes on PRS analyses.