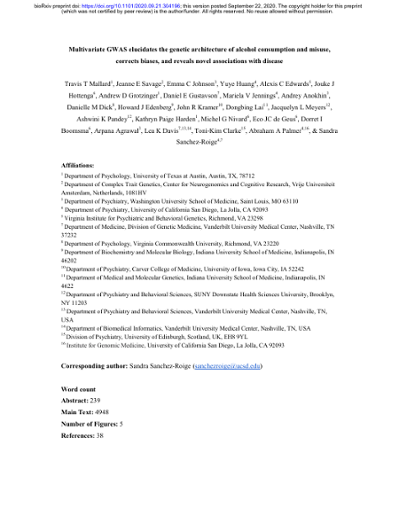 The American journal of psychiatry

Objective: Genome-wide association studies (GWASs) of the Alcohol Use Disorders Identification Test (AUDIT), a 10-item screen for alcohol use disorder (AUD), have elucidated novel loci for alcohol consumption and misuse. However, these studies also revealed that GWASs can be influenced by numerous biases (e.g., measurement error, selection bias), which may have led to inconsistent genetic correlations between alcohol involvement and AUD, as well as paradoxically negative genetic correlations between alcohol involvement and psychiatric disorders and/or medical conditions. The authors used genomic structural equation modeling to elucidate the genetics of alcohol consumption and problematic consequences of alcohol use as measured by AUDIT. Methods: To explore these unexpected differences in genetic correlations, the authors conducted the first item-level and the largest GWAS of AUDIT items (N=160,824) and applied a multivariate framework to mitigate previous biases. Results: The authors identified novel patterns of similarity (and dissimilarity) among the AUDIT items and found evidence of a correlated two-factor structure at the genetic level ("consumption" and "problems," rg=0.80). Moreover, by applying empirically derived weights to each of the AUDIT items, the authors constructed an aggregate measure of alcohol consumption that was strongly associated with alcohol dependence (rg=0.67), moderately associated with several other psychiatric disorders, and no longer positively associated with health and positive socioeconomic outcomes. Lastly, by conducting polygenic analyses in three independent cohorts that differed in their ascertainment and prevalence of AUD, the authors identified novel genetic associations between alcohol consumption, alcohol misuse, and health. Conclusions: This work further emphasizes the value of AUDIT for both clinical and genetic studies of AUD and the importance of using multivariate methods to study genetic associations that are more closely related to AUD.