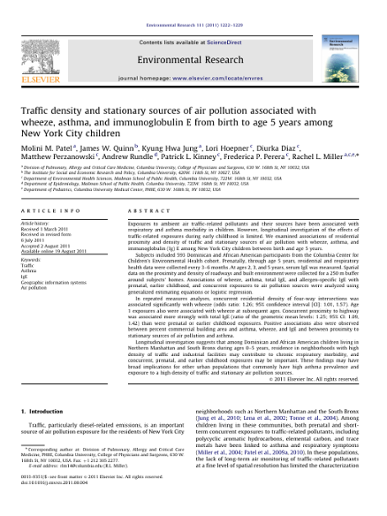 Exposures to ambient air traffic-related pollutants and their sources have been associated with respiratory and asthma morbidity in children. However, longitudinal investigation of the effects of traffic-related exposures during early childhood is limited. We examined associations of residential proximity and density of traffic and stationary sources of air pollution with wheeze, asthma, and immunoglobulin (Ig) E among New York City children between birth and age 5 years. Subjects included 593 Dominican and African American participants from the Columbia Center for Children's Environmental Health cohort. Prenatally, through age 5 years, residential and respiratory health data were collected every 3-6 months. At ages 2, 3, and 5 years, serum IgE was measured. Spatial data on the proximity and density of roadways and built environment were collected for a 250 m buffer around subjects' homes. Associations of wheeze, asthma, total IgE, and allergen-specific IgE with prenatal, earlier childhood, and concurrent exposures to air pollution sources were analyzed using generalized estimating equations or logistic regression. In repeated measures analyses, concurrent residential density of four-way intersections was associated significantly with wheeze (odds ratio: 1.26; 95% confidence interval [CI]: 1.01, 1.57). Age 1 exposures also were associated with wheeze at subsequent ages. Concurrent proximity to highway was associated more strongly with total IgE (ratio of the geometric mean levels: 1.25; 95% CI: 1.09, 1.42) than were prenatal or earlier childhood exposures. Positive associations also were observed between percent commercial building area and asthma, wheeze, and IgE and between proximity to stationary sources of air pollution and asthma. Longitudinal investigation suggests that among Dominican and African American children living in Northern Manhattan and South Bronx during ages 0-5 years, residence in neighborhoods with high density of traffic and industrial facilities may contribute to chronic respiratory morbidity, and concurrent, prenatal, and earlier childhood exposures may be important. These findings may have broad implications for other urban populations that commonly have high asthma prevalence and exposure to a high density of traffic and stationary air pollution sources.

Except where otherwise noted, this item's license is described as Copyright © 2011 Elsevier Inc. All rights reserved.