Maturation of Brain Microstructure and Metabolism Associates with Increased Capacity for Self-Regulation during the Transition from Childhood to Adolescence. 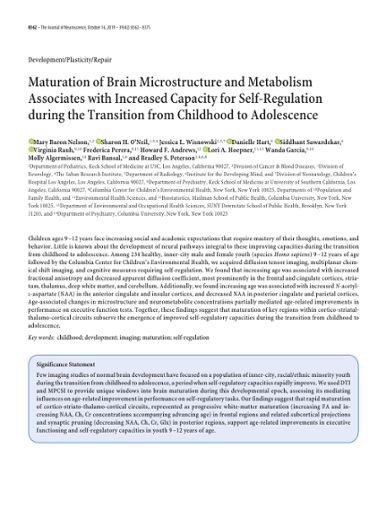 The Journal of neuroscience : the official journal of the Society for Neuroscience

Children ages 9-12 years face increasing social and academic expectations that require mastery of their thoughts, emotions, and behavior. Little is known about the development of neural pathways integral to these improving capacities during the transition from childhood to adolescence. Among 234 healthy, inner-city male and female youth (species ) 9-12 years of age followed by the Columbia Center for Children's Environmental Health, we acquired diffusion tensor imaging, multiplanar chemical shift imaging, and cognitive measures requiring self-regulation. We found that increasing age was associated with increased fractional anisotropy and decreased apparent diffusion coefficient, most prominently in the frontal and cingulate cortices, striatum, thalamus, deep white matter, and cerebellum. Additionally, we found increasing age was associated with increased -acetyl-l-aspartate (NAA) in the anterior cingulate and insular cortices, and decreased NAA in posterior cingulate and parietal cortices. Age-associated changes in microstructure and neurometabolite concentrations partially mediated age-related improvements in performance on executive function tests. Together, these findings suggest that maturation of key regions within cortico-striatal-thalamo-cortical circuits subserve the emergence of improved self-regulatory capacities during the transition from childhood to adolescence. Few imaging studies of normal brain development have focused on a population of inner-city, racial/ethnic minority youth during the transition from childhood to adolescence, a period when self-regulatory capacities rapidly improve. We used DTI and MPCSI to provide unique windows into brain maturation during this developmental epoch, assessing its mediating influences on age-related improvement in performance on self-regulatory tasks. Our findings suggest that rapid maturation of cortico-striato-thalamo-cortical circuits, represented as progressive white-matter maturation (increasing FA and increasing NAA, Ch, Cr concentrations accompanying advancing age) in frontal regions and related subcortical projections and synaptic pruning (decreasing NAA, Ch, Cr, Glx) in posterior regions, support age-related improvements in executive functioning and self-regulatory capacities in youth 9-12 years of age.

Except where otherwise noted, this item's license is described as Copyright © 2019 the authors.