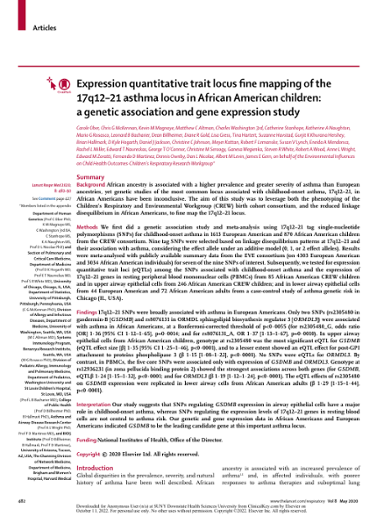 Background: African ancestry is associated with a higher prevalence and greater severity of asthma than European ancestries, yet genetic studies of the most common locus associated with childhood-onset asthma, 17q12-21, in African Americans have been inconclusive. The aim of this study was to leverage both the phenotyping of the Children's Respiratory and Environmental Workgroup (CREW) birth cohort consortium, and the reduced linkage disequilibrium in African Americans, to fine map the 17q12-21 locus. Methods: We first did a genetic association study and meta-analysis using 17q12-21 tag single-nucleotide polymorphisms (SNPs) for childhood-onset asthma in 1613 European American and 870 African American children from the CREW consortium. Nine tag SNPs were selected based on linkage disequilibrium patterns at 17q12-21 and their association with asthma, considering the effect allele under an additive model (0, 1, or 2 effect alleles). Results were meta-analysed with publicly available summary data from the EVE consortium (on 4303 European American and 3034 African American individuals) for seven of the nine SNPs of interest. Subsequently, we tested for expression quantitative trait loci (eQTLs) among the SNPs associated with childhood-onset asthma and the expression of 17q12-21 genes in resting peripheral blood mononuclear cells (PBMCs) from 85 African American CREW children and in upper airway epithelial cells from 246 African American CREW children; and in lower airway epithelial cells from 44 European American and 72 African American adults from a case-control study of asthma genetic risk in Chicago (IL, USA). Findings: 17q12-21 SNPs were broadly associated with asthma in European Americans. Only two SNPs (rs2305480 in gasdermin-B [GSDMB] and rs8076131 in ORMDL sphingolipid biosynthesis regulator 3 [ORMDL3]) were associated with asthma in African Americans, at a Bonferroni-corrected threshold of p<0·0055 (for rs2305480_G, odds ratio [OR] 1·36 [95% CI 1·12-1·65], p=0·0014; and for rs8076131_A, OR 1·37 [1·13-1·67], p=0·0010). In upper airway epithelial cells from African American children, genotype at rs2305480 was the most significant eQTL for GSDMB (eQTL effect size [β] 1·35 [95% CI 1·25-1·46], p<0·0001), and to a lesser extent showed an eQTL effect for post-GPI attachment to proteins phospholipase 3 (β 1·15 [1·08-1·22], p<0·0001). No SNPs were eQTLs for ORMDL3. By contrast, in PBMCs, the five core SNPs were associated only with expression of GSDMB and ORMDL3. Genotype at rs12936231 (in zona pellucida binding protein 2) showed the strongest associations across both genes (for GSDMB, eQTLβ 1·24 [1·15-1·32], p<0·0001; and for ORMDL3 (β 1·19 [1·12-1·24], p<0·0001). The eQTL effects of rs2305480 on GSDMB expression were replicated in lower airway cells from African American adults (β 1·29 [1·15-1·44], p<0·0001). Interpretation: Our study suggests that SNPs regulating GSDMB expression in airway epithelial cells have a major role in childhood-onset asthma, whereas SNPs regulating the expression levels of 17q12-21 genes in resting blood cells are not central to asthma risk. Our genetic and gene expression data in African Americans and European Americans indicated GSDMB to be the leading candidate gene at this important asthma locus.

Except where otherwise noted, this item's license is described as Copyright © 2020 Elsevier Ltd. All rights reserved.