Prenatal and early childhood exposure to phthalates and childhood behavior at age 7 years. 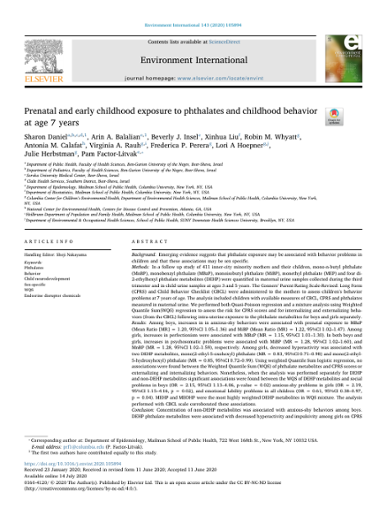 Background: Emerging evidence suggests that phthalate exposure may be associated with behavior problems in children and that these associations may be sex specific. Methods: In a follow up study of 411 inner-city minority mothers and their children, mono-n-butyl phthalate (MnBP), monobenzyl phthalate (MBzP), monoisobutyl phthalate (MiBP), monethyl phthalate (MEP) and four di-2-ethylhexyl phthalate metabolites (DEHP) were quantified in maternal urine samples collected during the third trimester and in child urine samples at ages 3 and 5 years. The Conners' Parent Rating Scale-Revised: Long Form (CPRS) and Child Behavior Checklist (CBCL) were administered to the mothers to assess children's behavior problems at 7 years of age. The analysis included children with available measures of CBCL, CPRS and phthalates measured in maternal urine. We performed both Quasi-Poisson regression and a mixture analysis using Weighted Quantile Sum(WQS) regression to assess the risk for CPRS scores and for internalizing and externalizing behaviors (from the CBCL) following intra-uterine exposure to the phthalate metabolites for boys and girls separately. Results: Among boys, increases in in anxious-shy behaviors were associated with prenatal exposure to MBzP (Mean Ratio [MR] = 1.20, 95%CI 1.05-1.36) and MiBP (Mean Ratio (MR) = 1.22, 95%CI 1.02-1.47). Among girls, increases in perfectionism were associated with MBzP (MR = 1.15, 95%CI 1.01-1.30). In both boys and girls, increases in psychosomatic problems were associated with MiBP (MR = 1.28, 95%CI 1.02-1.60), and MnBP (MR = 1.28, 95%CI 1.02-1.59), respectively. Among girls, decreased hyperactivity was associated with two DEHP metabolites, mono(2-ethyl-5-oxohexyl) phthalate (MR = 0.83, 95%CI 0.71-0.98) and mono(2-ethyl-5-hydroxyhexyl) phthalate (MR = 0.85, 95%CI 0.72-0.99). Using weighted Quantile Sum logistic regression, no associations were found between the Weighted Quantile Sum (WQS) of phthalate metabolites and CPRS scores or externalizing and internalizing behaviors. Nonetheless, when the analysis was performed separately for DEHP and non-DEHP metabolites significant associations were found between the WQS of DEHP metabolites and social problems in boys (OR = 2.15, 95%CI 1.13-4.06, p-value = 0.02) anxious-shy problems in girls (OR = 2.19, 95%CI 1.15-4.16, p = 0.02), and emotional lability problems in all children (OR = 0.61, 95%CI 0.38-0.97, p = 0.04). MEHP and MEOHP were the most highly weighted DEHP metabolites in WQS mixture. The analysis performed with CBCL scale corroborated these associations. Conclusion: Concentration of non-DEHP metabolites was associated with anxious-shy behaviors among boys. DEHP phthalate metabolites were associated with decreased hyperactivity and impulsivity among girls on CPRS scores. These findings lend further support to the adverse associations between prenatal phthalate exposure and childhood outcomes, and clearly suggest that such associations are sex and mixture specific.

Except where otherwise noted, this item's license is described as Copyright © 2020 The Author(s). Published by Elsevier Ltd.. All rights reserved.