HIV Prevention Via Mobile Messaging for Men Who Have Sex With Men (M-Cubed): Protocol for a Randomized Controlled Trial. 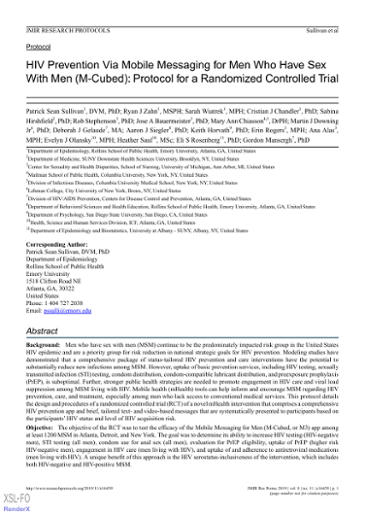 HIV care
HIV prevention
men who have sex with men

Background: Men who have sex with men (MSM) continue to be the predominately impacted risk group in the United States HIV epidemic and are a priority group for risk reduction in national strategic goals for HIV prevention. Modeling studies have demonstrated that a comprehensive package of status-tailored HIV prevention and care interventions have the potential to substantially reduce new infections among MSM. However, uptake of basic prevention services, including HIV testing, sexually transmitted infection (STI) testing, condom distribution, condom-compatible lubricant distribution, and preexposure prophylaxis (PrEP), is suboptimal. Further, stronger public health strategies are needed to promote engagement in HIV care and viral load suppression among MSM living with HIV. Mobile health (mHealth) tools can help inform and encourage MSM regarding HIV prevention, care, and treatment, especially among men who lack access to conventional medical services. This protocol details the design and procedures of a randomized controlled trial (RCT) of a novel mHealth intervention that comprises a comprehensive HIV prevention app and brief, tailored text- and video-based messages that are systematically presented to participants based on the participants' HIV status and level of HIV acquisition risk. Objective: The objective of the RCT was to test the efficacy of the Mobile Messaging for Men (M-Cubed, or M3) app among at least 1200 MSM in Atlanta, Detroit, and New York. The goal was to determine its ability to increase HIV testing (HIV-negative men), STI testing (all men), condom use for anal sex (all men), evaluation for PrEP eligibility, uptake of PrEP (higher risk HIV-negative men), engagement in HIV care (men living with HIV), and uptake of and adherence to antiretroviral medications (men living with HIV). A unique benefit of this approach is the HIV serostatus-inclusiveness of the intervention, which includes both HIV-negative and HIV-positive MSM. Methods: MSM were recruited through online and venue-based approaches in Atlanta, Detroit, and New York City. Men who were eligible and consented were randomized to the intervention (immediate access to the M3 app for a period of three months) or to the waitlist-control (delayed access) group. Outcomes were evaluated immediately postintervention or control period, and again three and six months after the intervention period. Main outcomes will be reported as period prevalence ratios or hazards, depending on the outcome. Where appropriate, serostatus/risk-specific outcomes will be evaluated in relevant subgroups. Men randomized to the control condition were offered the opportunity to use (and evaluate) the M3 app for a three-month period after the final RCT outcome assessment. Results: M3 enrollment began in January 2018 and concluded in November 2018. A total of 1229 MSM were enrolled. Data collection was completed in September 2019. Conclusions: This RCT of the M3 mobile app seeks to determine the effects of an HIV serostatus-inclusive intervention on the use of multiple HIV prevention and care-related outcomes among MSM. A strength of the design is that it incorporates a large sample and broad range of MSM with differing prevention needs in three cities with high prevalence of HIV among MSM. Trial registration: ClinicalTrials.gov NCT03666247; https://clinicaltrials.gov/ct2/show/NCT03666247. International registered report identifier (irrid): DERR1-10.2196/16439.