Behavioral Efficacy of a Sexual Health Mobile App for Men Who Have Sex With Men: Randomized Controlled Trial of Mobile Messaging for Men. 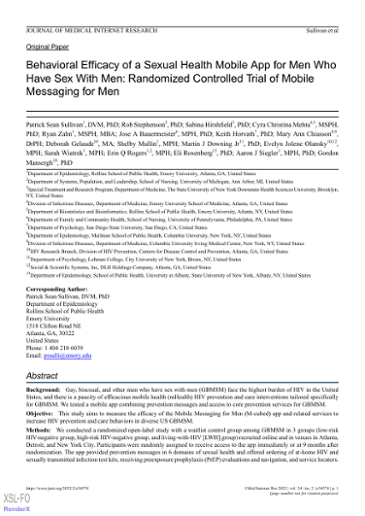 Background: Gay, bisexual, and other men who have sex with men (GBMSM) face the highest burden of HIV in the United States, and there is a paucity of efficacious mobile health (mHealth) HIV prevention and care interventions tailored specifically for GBMSM. We tested a mobile app combining prevention messages and access to core prevention services for GBMSM. Objective: This study aims to measure the efficacy of the Mobile Messaging for Men (M-cubed) app and related services to increase HIV prevention and care behaviors in diverse US GBMSM. Methods: We conducted a randomized open-label study with a waitlist control group among GBMSM in 3 groups (low-risk HIV-negative group, high-risk HIV-negative group, and living-with-HIV [LWH] group) recruited online and in venues in Atlanta, Detroit, and New York City. Participants were randomly assigned to receive access to the app immediately or at 9 months after randomization. The app provided prevention messages in 6 domains of sexual health and offered ordering of at-home HIV and sexually transmitted infection test kits, receiving preexposure prophylaxis (PrEP) evaluations and navigation, and service locators. Serostatus- and risk-specific prevention outcomes were evaluated at baseline, at the end of the intervention period, and at 3, 6, and 9 months after the intervention period. Results: In total, 1226 GBMSM were enrolled and randomized; of these 611 (49.84%) were assigned to the intervention group and 608 (99.51%) were analyzed, while 615 (50.16%) were assigned to the control group and 612 (99.51%) were analyzed. For high-risk GBMSM, allocation to the intervention arm was associated with higher odds of HIV testing during the intervention period (adjusted odds ratio [aOR] 2.02, 95% CI 1.11-3.66) and with higher odds of using PrEP in the 3 months after the intervention period (aOR 2.41, 95% CI 1.00-5.76, P<.05). No changes in HIV prevention or care were associated with allocation to the intervention arm for the low-risk HIV-negative and LWH groups. Conclusions: Access to the M-cubed app was associated with increased HIV testing and PrEP use among high-risk HIV-negative GBMSM in 3 US cities. The app could be made available through funded HIV prevention providers; additional efforts are needed to understand optimal strategies to implement the app outside of the research setting. Trial registration: ClinicalTrials.gov NCT03666247; https://clinicaltrials.gov/ct2/show/NCT03666247. International registered report identifier (irrid): RR2-10.2196/16439.