Geospatial Resolution of Human and Bacterial Diversity with City-Scale Metagenomics 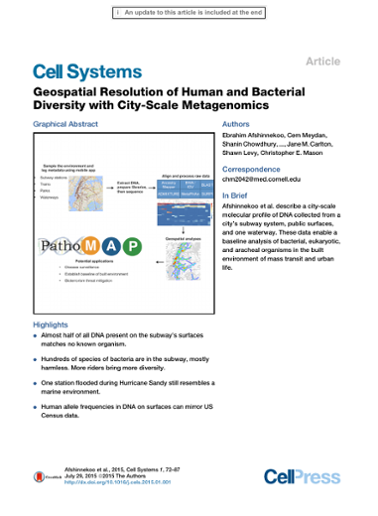 The panoply of microorganisms and other species present in our environment influence human health and disease, especially in cities, but have not been profiled with metagenomics at a city-wide scale. We sequenced DNA from surfaces across the entire New York City (NYC) subway system, the Gowanus Canal, and public parks. Nearly half of the DNA (48%) does not match any known organism; identified organisms spanned 1,688 bacterial, viral, archaeal, and eukaryotic taxa, which were enriched for harmless genera associated with skin (e.g., Acinetobacter). Predicted ancestry of human DNA left on subway surfaces can recapitulate U.S. Census demographic data, and bacterial signatures can reveal a station's history, such as marine-associated bacteria in a hurricane-flooded station. Some evidence of pathogens was found (Bacillus anthracis), but a lack of reported cases in NYC suggests that the pathogens represent a normal, urban microbiome. This baseline metagenomic map of NYC could help long-term disease surveillance, bioterrorism threat mitigation, and health management in the built environment of cities.