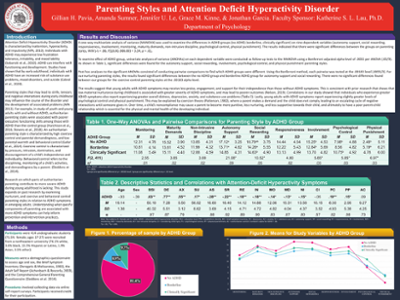 Attention Deficit Hyperactivity Disorder (ADHD) is a neurodevelopment disorder characterized by inattention, hyperactivity, and impulsivity (American Psychiatric Association, 2013). Individuals with ADHD often also experience difficulties with low frustration tolerance, irritability, and mood lability (Sobanski et al., 2010). ADHD can be a debilitating disorder that interferes with functioning and development. For example, studies have shown that by early adulthood, individuals with ADHD have an increased risk of substance use problems, developing mood disorders, and attempting suicide (Cabral et al., 2020). Patterns and dynamics of family interactions during early childhood may influence the course of the disorder and can contribute to the further development of associated problems. Children with ADHD have family relationships that are often characterized by strife, tension, and negative interactions (APA, 2013). Given this, a popular topic of study surrounding ADHD is different parenting styles and their associations with manifestations of ADHD. For example, in a study of children and adolescents with and without ADHD, authoritarian parenting styles were associated with poorer executive functioning skills among the children with ADHD than the control group (Hutchison et al., 2016). In another study, young adults with ADHD compared with young adults without ADHD, reported experiencing significantly higher levels of maternal authoritarian parenting as children (Stevens et al., 2018). An authoritarian parenting style is characterized by high levels of coercive control and parental demandingness, and low levels of parental warmth and behavioral control (Gafor et al., 2014). However, there is still a lack of research regarding which specific components of authoritarian parenting contribute to a more severe pathology of ADHD during young adulthood. Coercive control is characterized by pressure, intrusion, domination, and discouragement of a child’s independence and individuality, and behavioral control refers to the disciplining, demandingness, and monitoring of a child’s activities by a parent. (Sleddens et al., 2014). This study examines coercive and behavioral control in relation to ADHD symptoms in emerging adults. It is important to understand what specific components of parenting are most associated with high levels of ADHD symptomatology in order to help prevent further difficulties for people with ADHD during young adulthood.

Electronic Accessibility Statement: SUNY Oneonta is committed to providing equal access to college information by ensuring our digital content is accessible by everyone regardless of physical, sensory, or cognitive ability. This item has been checked by Adobe Acrobat Accessibility Check and remediated with the following result: [Poster remediation: title, language / Hazards: not tagged, no alt text, character encoding, tab order]. To request further accessibility remediation on this SOAR repository item for your specific needs, please contact openaccess@oneonta.edu.