An Agent-Based Model of a Highway On-Ramp 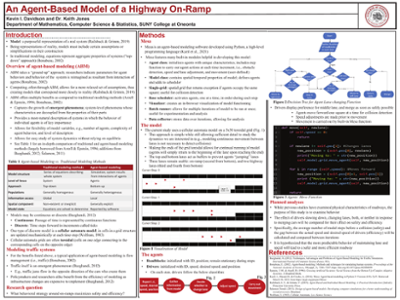 Mathematical modeling is a tool often used by researchers to investigate research questions in a cost- efficient manner. While traditional modeling methods focused on constructing equations to represent aggregate properties of a system, in recent decades a new approach – agent-based modeling (or ABM) – has gained in popularity (Bonabeau, 2002) as usage of computers has become more prevalent. The difference between ABM and traditional modeling is, in part, conceptual. ABM takes a ground-up approach, with researchers indicating parameters for the behavior of individual agents (Bonabeau, 2002). The behavior of the system, then, is reimagined as the result of the interactions of these agents, as opposed to earlier top-down approaches that modeled the behavior of the system directly. This makes agent-based modeling particularly suited for capturing emergent phenomena (Bonabeau, 2002). Additionally, ABM is better suited for applications in which it makes more sense to consider the behavior of individual entities, not the entire system (Bonabeau, 2002). Because of these benefits, one typical application of ABM is in modeling traffic systems (Benhamza et al., 2012). Traffic itself is an emergent phenomenon – traffic jams, for example, can move in the opposite direction of the cars that cause them (Bazghandi, 2012). Studying traffic is of utmost concern as traffic jams can cause considerable safety and efficiency concerns. Because any sizeable infrastructure change is expensive to implement, policymakers and researchers alike benefit from the efficiency of modeling. In the current study, the student researcher is developing an agent-based traffic model using the Python-based ABM program Mesa (Version 2.0; Kazil et al., 2021). The model consists of a two-lane highway with an on-ramp, and car agents driving on this highway. Whereas other studies have focused on physical features of the roadway (Benhamza et al., 2012), the intent of this study is to examine behavior. Planned analyses involve comparing three possible behavioral responses (maintaining speed and lane, changing lanes, and slowing) to cars merging from the on-ramp. While slowing or changing lanes may seem more “courteous”, these behaviors may be less predictable to other motorists, producing a negative effect on the traffic system. Thus, it is predicted that maintaining speed and lane is ideal for safety and efficiency, defined here in terms of number of model steps before an accident and difference between average actual speed and average desired speed.

Electronic Accessibility Statement: SUNY Oneonta is committed to providing equal access to college information by ensuring our digital content is accessible by everyone regardless of physical, sensory, or cognitive ability. This item has been checked by Adobe Acrobat Accessibility Check and remediated with the following result: [Poster remediation: tagged, reading order, title, language / Hazards: alt text, character encoding]. To request further accessibility remediation on this SOAR repository item for your specific needs, please contact openaccess@oneonta.edu.