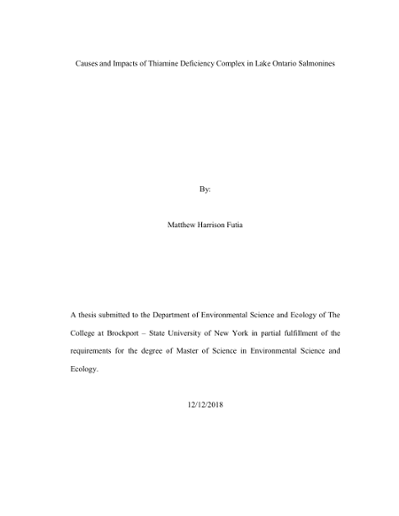 For at least 50 years, salmonine species in the Great Lakes region have been suffering from a vitamin deficiency termed Thiamine Deficiency Complex (TDC) (Marcquenski and Brown 1997; Ketola et al. 1999). TDC impacts salmonines at alevin and adult stages, although the most common impacts are observed before first-feeding (Honeyfield et al. 1998; Fitzsimons et al. 1999; Lee et al. 2009). Alevins with TDC experience various neurological problems including lethargy, hyperexcitability, spiraled swimming, and ultimately death (Fitzsimons 1995). However, alevins that do not die directly from TDC may die from secondary effects that limit their feeding and predator avoidance (Fitzsimons et al. 2009; Ivan et al. 2018). Therefore, TDC can reduce offspring survival drastically, limiting wild recruitment and survival in hatcheries. However, thiamine treatments under hatchery conditions have been able to reduce TDC, increasing offspring survival significantly (Fitzsimons 1995; Koski et al. 1999; Fitzsimons et al. 2001; Lee et al. 2009; Futia et al. 2017). Adult salmonines can also experience symptoms of TDC when deficiencies are severe (Brown et al. 2005). Common symptoms include wiggling behavior while swimming, lethargy, and occasionally mortality (Brown et al. 2005; Futia et al. 2017). Thiamine deficiency in salmonines is not limited to the Great Lakes. In New York’s Finger Lakes, Lake Champlain, and the Baltic Sea, various salmonine species suffer from thiamine deficiency (Fisher et al. 1995; Bengtsson et al. 1999; J. Rinchard, The College at Brockport, Brockport, New York, personal communication, 2018). Despite thiamine deficiency being an international issue that has been occurring for decades, the specific cause has yet to be determined. However, two hypotheses have been proposed: 1) degradation of thiamine by the thiamine-degrading enzyme, thiaminase (Honeyfield et al. 2002; Tillitt et al. 2005), and 2) increased use of thiamine as an antioxidant in response to high dietary lipid content (Lukienko et al. 2000; Keinänen et al. 2012). While both of these hypotheses are plausible, neither has been proven to cause thiamine deficiencies in wild populations. In the Great Lakes region, alewife (Alosa pseudoharengus) are associated with the occurrence of TDC. Honeyfield et al. (2005) demonstrated that feeding exclusively on alewife induced TDC in adult salmonines. Furthermore, following the collapse of the alewife population in Lake Huron, wild recruitment of lake trout (Salvelinus namaycush) increased (Fitzsimons et al. 2010; Riley et al. 2011). Alewife have elevated thiaminase activity (Tillitt et al. 2005); however, the source of the thiaminase is unknown (Richter et al. 2012). Alewife also have greater lipid content than other abundant offshore prey fish in the Great Lakes (Happel et al. 2017); however, relationships between lipid content of prey and the occurrence of TDC in salmonines has not been proven. In my thesis study, the extent of TDC for five salmonine species (brown trout Salmo trutta, Chinook salmon Oncorhynchus tshawytscha, coho salmon O. kisutch, lake trout, and steelhead trout O. mykiss) in Lake Ontario was determined from 2015 to 2017. The severity of TDC was determined based on thiamine concentrations in egg, liver, and muscle tissue as well as the occurrence of TDC-induced offspring mortality. Additionally, dietary influence on thiamine concentrations was evaluated. Using fatty acid signature analysis, the inclusion of alewife, rainbow smelt (Osmerus mordax), and round goby (Neogobius melanostomus) in salmonine diets was determined. Lipid content of whole-body prey fish and various tissues of predator species were determined to investigate the influence of fat content on thiamine concentrations. Lastly, the potential effect of lipid peroxidation on salmonine thiamine concentrations was determined by comparing the proportions of fatty acids, grouped based on degrees of unsaturation (i.e., saturated, monounsaturated, and polyunsaturated), in egg and belly flap tissue with thiamine concentrations.