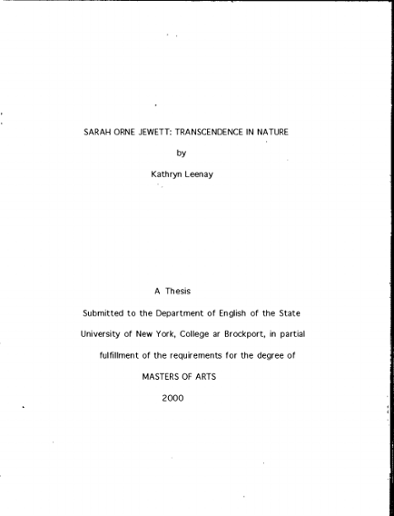 Sarah Orne Jewett wrote about people and things “just as they are” (Silverthorne 35) . Her father had given her this advice and, in a way, she made it her mission in life to acquaint people with each other. Despite her simple language and seemingly simple characters her work is full of wisdom and touches on m any universal themes. Willa Cather believed Jewett’s last novel, The Country of the Pointed Firs, deserved a place alongside Huckleberry Finn and The Scarlet Letter (Cather vi). Although some critics in Jewett’s time complained of “very little plot” (Silverthorne 143 ) in her stories, other influential critics and publishers, such as William Dean Howells, enjoyed and revered her “ free movement, unfettered by the limits of plot, and keeping only to the reality, which no other eye than hers has seen so subtly, so humorously, so touchingly” (Silverthorne 207) . I will analyze The Country of the Pointed Firs using the 1925 edition, which includes the three appended stories: “The Queen’s Twin,” “A Dunnet Shepherdess,” and “William’s Wedding.” Natural settings in the novel and in the appended stories allow characters in Country to transcend apparently conventional human limitations such as physical and emotional isolation from community, linear time, traditional Christian religions, and gender. The anonymous narrator in the novel develops pliant and enriching relationships with other community members as she “returns” to her true self. In the first few chapters of Country, she realizes that isolation from community can renew the soul and make one a stronger member of a community in the long run. This Transcendentalist tenet is expanded throughout the original novel, as well as the appended stories. Using natural settings as a "school" for transcendence, Jewett also touches on the Transcendentalist tenet of “the great and small," as seen in examinations of linear time and traditional Christian beliefs in the novel. Most of the characters in the novel are of a mature age, appearing to be beyond the years of parturition. Despite this ‘‘limitation," the characters are able to prosper on seemingly infertile, rocky land. They also appear physically younger than their true age, thereby continually contradicting the limitations of linear time on a body. The merging of the two extremes, great and small, is a collapse of a traditionally linear, hierarchical structure. In other words, when the two extremes are brought together as one there is no longer a need for a bipolar relationship between youth and age, good and bad, and man and woman. An embodiment of all forces in oneness, as seen in the work of two of Jewett's influences, Ralph Waldo Emerson and Emanual Swedenborg, leads to transcendence. The Christian belief that the greatness of God was born into the microcosm of a human baby, Jesus Christ, is an example of the "great and small" collapsing into one. Jewett uses and, in a way, redefines this image when she juxtaposes the maternal Mother Earth figure, Mrs. Blackett, with the conventional Christian minister at the Bowden Reunion. She introduces a woman -centered Christianity in her book where the church is found in the domestic setting of the home. Finally, Jewett transcends gender role limitations (again using natural settings for her place of education) by allowing characters to visit both their maternal and paternal selves. Country is a subtle novel that reveals Jewett’s own exploration and, essentially, reconstruction of many traditional nineteenth century beliefs. Jewett does not work with young heroines like Alcott's Jo or Bronte’s Jane Eyre to convey her message, but rather she returns, as the title of Country’s first chapter implies, to the teachings of the past and chooses an older woman, Almira Todd, as a guide and mentor for both the reader and the narrator. In her characters, Jewett reveals the wisdom of all ages and so taps into perpetual knowledge, growth, and a youthful spirit.