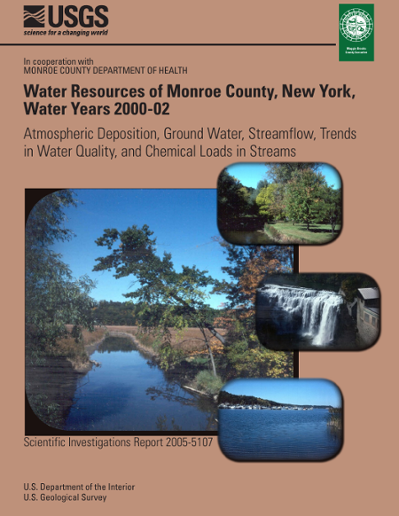 This report, the fifth in a series that presents analyses of the hydrologic data collected in Monroe County since 1984, interprets data from four surface-water-monitoring sites in the Irondequoit Creek basin (Irondequoit Creek at Railroad Mills, East Branch Allen Creek at Pittsford, Allen Creek near Rochester, and Irondequoit Creek above Blossom Road); and from three sites on tributaries to the Genesee River (Oatka Creek at Garbutt, Honeoye Creek at Honeoye Falls, and Black Creek at Churchville) and from the Genesee River at Charlotte Docks. It also interprets data from a site on Northrup Creek, which provides information on nutrient loads delivered to Long Pond, a small eutrophic embayment of Lake Ontario. The report also includes water-level and water-quality data from nine observation wells in Ellison Park, and atmospheric-deposition data from a collection site at Mendon Ponds. Atmospheric Deposition: Average annual precipitation for 2000-02 was 33.11 in., 0.94 in. below normal. Average annual loads of some chemical constituents in atmospheric deposition for 2000-02 differed considerably from those for the previous period of record. Loads of all nutrients except ammonia decreased by amounts ranging from 28 percent (ammonia + organic nitrogen and phosphorus) to 2 percent (nitrite + nitrate), whereas ammonia loads an increased by 8 percent. Loads of dissolved sodium and total zinc in atmospheric deposition increased by 56 percent, and 54, percent respectively, over the previous period of record. Average annual loads of other constituents showed decreases ranging from 41 percent (dissolved magnesium) to 17 percent (dissolved chloride). Loads of all nutrients deposited in the Irondequoit Creek basin from atmospheric sources during 2000-02 greatly exceeded those transported by Irondequoit Creek. The ammonia load deposited in the basin was 165 times the load transported at Blossom Road (the most downstream site); the ammonia + organic nitrogen load was 2.8 times greater, orthophosphate 9.7 times greater, total phosphorus 1.2 times greater, and the nitrite + nitrate load was 1.6 times greater. Average yields of dissolved chloride and dissolved sulfate from atmosphoric sources were much less than those transported by streamflow at Blossom Road—chloride was about 1.5 percent and sulfate about 9.1 percent of the amount transported by Irondequoit Creek. Ground water: Ground-water-levels and water quality data were collected from 9 observation wells in Ellison Park in Monroe County. All wells except Mo 2 and Mo 659 are in the flood plain of Irondequoit Creek. Water levels indicate frequent reversals in direction of lateral flow toward or away from Irondequoit Creek, and all wells except Mo2 and Mo 659 respond to water level fluctuations in the Creek. Trend tests on water levels for the period of record indicate a slight upward trend in water levels at all nine wells, two of which (Mo 3 and Mo 667) were statistically significant. Concentrations of ammonia and ammonia + organic nitrogen showed a general decrease for the current period of record. Total phosphorus concentrations showed an increase at four wells and a decrease at four wells. Water quality data showed that the highest median concentrations of nutrients continues to occur in Mo 667 and the highest median concentrations of common ions was at Mo 664. Streamflow: Statistical analysis of long-term (greater than 15 years) streamflow records for unregulated streams in Monroe County indicated that annual mean flows for water years (A water year is the 12-month period from October 1 through September 30 of the following year.) 2000-02 generally were in the normal range (75th to 25th percentile), although Allen Creek continued to show a significant downward trend in mean monthly streamflow during the 1984-2002 water years. Chemical Concentration in Streams: Concentrations of several constituents in streams of the Irondequoit Creek basin showed statistically significant (a = 0.05) trends from the beginning of their period of record through 2002. Three of the four Irondequoit Creek sites (Allen Creek, Blossom Road, and Railroad Mills) showed downward trends in ammonia (4.6 to 12.0 percent per year) and ammonia + organic nitrogen (2.8 to 5.3 percent per year). Allen Creek showed downward trends in nitrite + nitrate and total phosphorus (both 1.2 percent per year), and Irondequoit Creek above Blossom Road showed an upward trend in orthophosphate (1.8 percent per year). Three Irondequoit Creek sites showed upward trends in dissolved chloride: Railroad Mills (4.8 percent per year), Allen Creek, and Blossom Road (both 1.9 percent per year). Allen Creek showed a downward trend in sulfate of 0.98 percent per year, whereas Blossom Road showed a downward trend in suspended solids of 4.0 percent per year. Volatile suspended solids showed an upward trend of 3.2 percent per year at Allen Creek and a downward trend of 2.2 percent per year at Blossom Road. Northrup Creek in western Monroe County, showed significant downward trends in concentrations of volatile suspended solids (2.5 percent per year), total phosphorus (5.3 percent per year), and orthophosphate (9.9 percent per year). The Genesee River at Charlotte Docks showed downward trends in volatile suspended solids (2.1 percent per year) and ammonia + organic nitrogen (4.5 percent per year). Oatka Creek at Garbutt showed an upward trend of 21.4 percent per year in turbidity. Chemical Loads in Streams: Mean annual yields (pounds or tons per square mile) of many constituents at the Irondequoit Creek sites were lower than those in previous reporting periods. Suspended solids and nitrite + nitrate yields were lower at three of the sites, and yields of volatile suspended solids, ammonia, and total phosphorus were lower at two of the sites. East Branch Allen Creek showed lower yields for five of the nine constituents for 2000-02, than for previous reporting periods. The decreased yields at East Branch Allen Creek are likely due to the Jefferson Road stormflow-detention basin and the much lower than normal runoff for the 2000-02 period.