A Synthesis of Ecological and Fish-Community Changes in Lake Ontario, 1970-2000 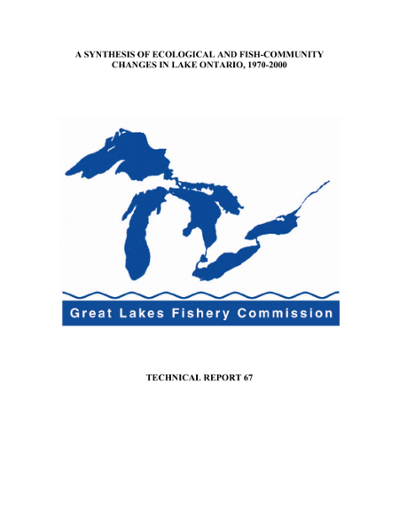 We assessed stressors associated with ecological and fishcommunity changes in Lake Ontario since 1970, when the first symposium on Salmonid Communities in Oligotrophic Lakes (SCOL I) was held (J. Fish. Res. Board Can. 29: 613-616). Phosphorus controls implemented in the early 1970s were undeniably successful; lower food-web studies showed declines in algal abundance and epilimnetic zooplankton production and a shift in pelagic primary productivity toward smaller organisms. Stressors on the fish community prior to 1970 such as exploitation, sea lamprey (Petromyzon marinus) predation, and effects of nuisance populations of alewife (Alosa pseudoharengus) were largely ameliorated by the 1990s. The alewife became a pivotal species supporting a multi-million-dollar salmonid sport fishery, but alewife-induced thiamine deficiency continued to hamper restoration and sustainability of native lake trout (Salvelinus namaycush). Expanding salmonine populations dependent on alewife raised concerns about predator demand and prey supply, leading to reductions in salmonine stocking in the early 1990s. Relaxation of the predation impact by alewives and their shift to deeper water allowed recovery of native fishes such as threespine stickleback (Gasterosteus aculeatus) and emerald shiner (Notropis atherinoides). The return of the Lake Ontario ecosystem to historical conditions has been impeded by unplanned introductions. Establishment of Dreissena spp. led to increased water clarity and increased vectoring of lower trophic-level production to benthic habitats and contributed to the collapse of Diporeia spp. populations, behavioral modifications of key fish species, and the decline of native lake whitefish (Coregonus clupeaformis). Despite reduced productivity, exotic-species introductions, and changes in the fish community, offshore Mysis relicta populations remained relatively stable. The effects of climate and climate change on the population abundance and dynamics of Lake Ontario fish were unknown at the time of SCOL I, but a temperature-time series begun in the late 1950s in the Kingston Basin has since provided evidence of climate warming and associated fishcommunity changes. We should expect ecological surprises in the coming decades that will challenge scientists and fishery managers especially as they face new exotic species, climate warming, and escalating stakeholder demands on the resource. Continuous long-term ecological studies were critical for interpreting changes in Lake Ontario’s fish community over the past three decades and will be essential in the future for both scientific understanding and management of the fishery.