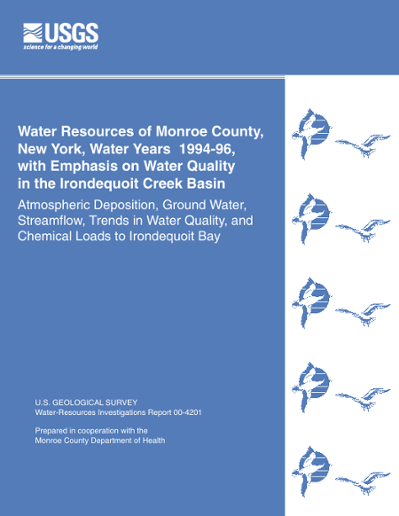 Irondequoit Creek drains 169 square miles in the eastern part of Monroe County. Nutrients transported by Irondequoit Creek to Irondequoit Bay on Lake Ontario have contributed to the eutrophication of the Bay. Sewage-treatmentplant effluent, a major source of nutrients to the creek and its tributaries, was eliminated from the basin in 1979 by diversion to a regional wastewater-treatment facility, but sediment and contaminants from nonpoint sources continue to enter the creek and Irondequoit Bay. This report analyzes data from five surfacewater- monitoring sites in the Irondequoit Creek basin—Irondequoit Creek at Railroad Mills, East Branch Allen Creek at Pittsford, Allen Creek near Rochester, Irondequoit Creek at Blossom Road, and Irondequoit Creek at Empire Boulevard. It is the third in a series of reports that present interpretive analyses of the hydrologic data collected in Monroe County since 1984. Also included are data from a site on Northrup Creek, which drains a 23.5-square-mile basin west of the Genesee River in western Monroe County, to provide information on surface-water quality in a stream west of the Genesee River and on loads of nutrients delivered to Long Pond, a small eutrophic embayment of Lake Ontario, and data from the Genesee River for comparison of historical water-quality conditions with 1994-96 conditions. Water-level and water-quality data from nine observation wells in Ellison Park, and atmospheric-deposition data from Mendon Ponds, also are included. Average annual yields of chemical constituents from atmospheric deposition for 1994-96 were generally similar to those for the previous 10 years (1984-93), except for dissolved sodium, dissolved potassium, total phosphorus, and orthophosphate, which ranged from 42 percent (dissolved sodium) to 275 percent (dissolved potassium) greater than during 1984- 93, and dissolved sulfate and ammonia, which were about 30 percent less than in 1984-93. Loads of all nutrients deposited in the Irondequoit Creek basin from atmospheric sources during water years 1994-96 exceeded those removed by Irondequoit Creek at Blossom Road—ammonia by 5,600 percent, orthophosphate by 2,500 percent, ammonia + organic nitrogen by 350 percent, total phosphorus by 300 percent and nitrite + nitrate by 140 percent. Average yields of dissolved chloride and dissolved sulfate from atmospheric deposition were much less than those transported in streamflow—yields of dissolved chloride from atmospheric sources were only 1.9 percent, and yields of sulfate were only 9.2 percent, of those transported in streamflow at Blossom Road. Concentrations of several chemical constituents in streams of the Irondequoit Creek basin showed statistically significant trends from 2 Water Resources of Monroe County, New York Water Years 1994-96, with Emphasis on Water Quality in the Irondequoit Basin the beginning of their period of record through 1996. The constituents that showed the greatest number of statistically significant trends were dissolved chloride, ammonia, and ammonia + organic nitrogen. Dissolved chloride showed an upward trend at Blossom Road, Allen Creek, and Empire Boulevard and a downward trend at Railroad Mills. Ammonia showed downward trends at Allen Creek, Blossom Road and Railroad Mills. Ammonia + organic nitrogen showed a downward trend at Allen Creek, Blossom Road, and Empire Boulevard. Nitrite + nitrate showed a downward trend at Allen Creek, and orthophosphate showed an upward trend at that site. Turbidity and total suspended solids showed a downward trend at Empire Boulevard. Neither total phosphorus nor volatile suspended solids showed statistically significant trends in concentration at any of the Irondequoit basin sites. Northrup Creek showed a downward trend in total suspended solids and ammonia + organic nitrogen, and an upward trend in dissolved chloride. The Genesee River showed a downward trend in ammonia + organic nitrogen and chloride, and an upward trend in orthophosphate. Most constituents for the 1994-96 water years showed lower average yields at Blossom Road than for the 1989-93 water years, but dissolved chloride showed higher yields for the 1994-96 water years at all sites except Blossom Road. Ammonia + organic nitrogen and total phosphorus showed a decrease in yield at all sites after 1993, and nitrite + nitrate showed slightly higher yields for 1994-96 at the upstream, predominantly rural sites, and lower yields at the downstream, more urban sites, than during 1989-93. The trends and changes in surface-water quality after 1993 can be attributed to several factors within the basin, including land-use changes, annual and seasonal variations in streamflow, and year-to-year variations in the application of deicing salts on area roads. Statistical analyses of long-term (9 years or more) streamflow records of three unregulated streams in Monroe County indicate that annual mean flows for water years 1994-96 were in the normal range (75th to 25th percentile), although Allen Creek showed a statistically significant downward trend in monthly mean streamflow over the 1984- 96 water years.