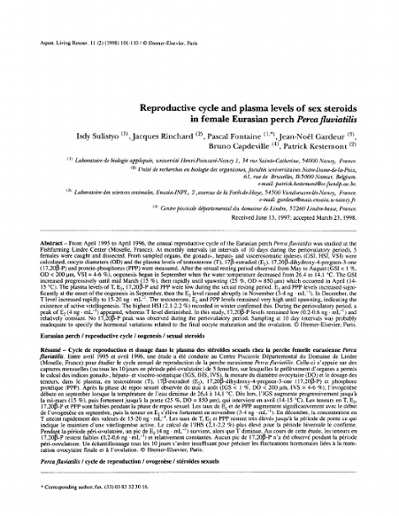 From April 1995 to April 1996, the annual reproductive cycle of the Eurasian perch Perca fluviatilis was studied at the Fishfarming Lindre Center (Moselle, France). At monthly intervals (at intervals of 10 days during the periovulatory period), 5 females were caught and dissected. From sampled organs, the gonado-, hepato- and viscerosomatic indexes (GSI, HSI, VSI) were calculated, oocyte diameters (OD) and the plasma levels of testosterone (T), 17P-estradiol (E2), 17,20P-dihydroxy-4-pregnen-3-one (17,2Op-P) and protein-phosphorus (PPP) were measured. After the sexual resting period observed from May to August (GSI < 1 %, OD < 200 urn, VSI = 4-6 %), oogenesis began in September when the water temperature decreased from 26.4 to 14.1 “C. The GSI increased progressively until mid March (15 %), then rapidly until spawning (25 %, OD = 850 urn) which occurred in April (14- 15 “C). The plasma levels of T, E,, 17,2Op-P and PPP were low during the sexual resting period. E, and PPP levels increased significantly at the onset of the oogenesis in September, then the E, level raised abruptly in November (3-4 ng mL-‘). In December, the T level increased rapidly to 15-20 ng . mL-’ The testosterone, E, and PPP levels remained very high until spawning, indicating the existence of active vitellogenesis. The highest HSI (2.1-2.2 %) recorded in winter confirmed this. During the periovulatory period, a peak of E, (4 ng . mL-‘) appeared, whereas T level diminished. In this study, 17,2Op-P levels remained low (0.2-0.6 ng mL-‘) and relatively constant. No 17,2Op-P peak was observed during the periovulatory period. Sampling at 10 day intervals was probably inadequate to specify the hormonal variations related to the final oocyte maturation and the ovulation. 0 Ifremer-Elsevier, Paris.