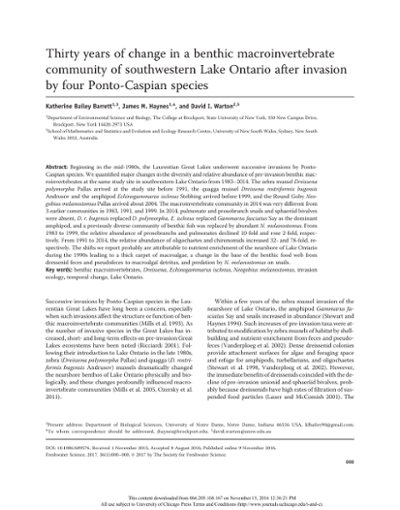 Beginning in the mid-1980s, the Laurentian Great Lakes underwent successive invasions by PontoCaspian species. We quantified major changes in the diversity and relative abundance of pre-invasion benthic macroinvertebrates at the same study site in southwestern Lake Ontario from 1983–2014. The zebra mussel Dreissena polymorpha Pallas arrived at the study site before 1991, the quagga mussel Dreissena rostriformis bugensis Andrusov and the amphipod Echinogammarus ischnus Stebbing arrived before 1999, and the Round Goby Neogobius melanostomus Pallas arrived about 2004. The macroinvertebrate community in 2014 was very different from 3 earlier communities in 1983, 1991, and 1999. In 2014, pulmonate and prosobranch snails and sphaeriid bivalves were absent, D. r. bugensis replaced D. polymorpha, E. ischnus replaced Gammarus fasciatus Say as the dominant amphipod, and a previously diverse community of benthic fish was replaced by abundant N. melanostomus. From 1983 to 1999, the relative abundance of prosobranchs and pulmonates declined 10-fold and rose 2-fold, respectively. From 1991 to 2014, the relative abundance of oligochaetes and chironomids increased 32- and 78-fold, respectively. The shifts we report probably are attributable to nutrient enrichment of the nearshore of Lake Ontario during the 1990s leading to a thick carpet of macroalgae, a change in the base of the benthic food web from dressenid feces and pseudofeces to macroalgal detritus, and predation by N. melanostomus on snails.

The published article in a non-commercial data repository maintained by an institution of which the author(s) are a member, provided the school meets all relevant conditions described in the Guidelines and in the editorial office’s communications with the author(s). An institutional repository, as distinguished from the author(s) personal or departmental web site, is designed for the systematic storage, retrieval, and delivery of scholarly material. The author(s) article may be made publicly available after the appropriate embargo period* has been observed. The author(s) are responsible for informing the manager of the institutional repository of the embargo period that must be observed. *The embargo period is twelve (12) months unless otherwise required by mandate. --- Author contributions: KBB organized the study, participated in all field collections, identified all invertebrates, did all statistical analyses, and wrote the first draft of the manuscript, which arose from her MS Thesis. JMH was KBB’s major advisor, led collecting of invertebrates by SCUBA, consulted on statistical findings, and played a major role during revisions of the manuscript. DIW provided KBB with instructions and code to implement the appropriate multivariate tests in the mvabund package of R. We thank Anthony Marsocci and Kingdon Barrett, who helped process our samples; Kelly Owens, our third diver; Rod Hedley, who provided historical information about the Olcott reef; Ely Kosnicki, who trained KBB to identify Chironomidae; Gary Neuderfer, who confirmed several macroinvertebrate identifications; David Sanderson-Kilchenstein, who repaired the dome suction sampler; Clayton Williams for assisting with interpretation of multivariate analyses in R; David Roberts and Maddie Wroblewski for assisting KBB with making final revisions to the ordination in R; and Christopher Norment and Jacques Richard, who critically reviewed an earlier draft of this manuscript. We also thank 2 anonymous referees whose guidance greatly improved this paper, and the Distinguished Professors Fund, The College at Brockport, State University of New York, for financial support.
ae974a485f413a2113503eed53cd6c53
https://doi.org/10.1086/689576