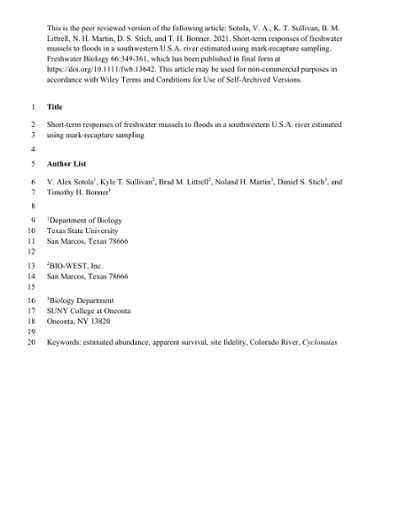 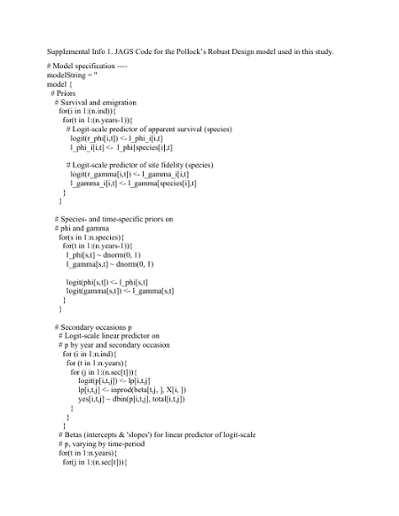 Floods can directly affect riverine organisms by displacing them, and population‐level responses to floods can vary depending on flood magnitude and organism mobility. Benthic organisms can resist displacement until substrates become unstable, whereas mobile organisms are generally more resilient. Freshwater mussels are benthic organisms with low mobility, and there is limited research on their population‐level responses to floods. This study provides novel insights to population‐level responses of mussels to large floods (>500 m3/s). Population dynamics (i.e. abundance, survival, and site fidelity) and sampling efficiency (i.e. detection probability) were estimated in a robust design framework for four freshwater mussel species (Cyclonaias petrina, Cyclonaias pustulosa, Amblema plicata, and Tritogonia verrucosa) from 2017 to 2019 at two sites (upper and lower sites) within riffle habitats in the Colorado River, Texas, U.S.A. Individuals of each species were affixed with shellfish tags, with C. petrina and C. pustulosa individuals also being affixed with passive integrated transponder tags. Changes in population dynamics related to the flood event at each site were directly tested. During sampling, a major flood occurred at each of the two study sites; the floods differed in magnitude but were in the 99th percentile of historical flows at their respective gages. There were site‐ and species‐specific differences in estimated abundances, survival, and site fidelity during periods with the floods. Estimated abundances of C. petrina, C. pustulosa, and T. verrucosa were reduced 40–78% by the lesser flood magnitude (1,283 m3/s) at the upper site. Estimated abundances of C. petrina, C. pustulosa, and A. plicata were reduced 93–95% by the greater flood magnitude (4,332 m3/s) at the lower site. There was a reduction in survival of C. petrina at the upper site, while initially high survival at the lower site was reduced during the interval with the flood for all species. Finally, there was a reduction in site fidelity of C. pustulosa at the lower site. Floods reduced the abundance of all species within riffle habitats at the two sites. Large floods, therefore, affect population dynamics of mussels, but the fate of the displaced mussels is unknown, and with limited inference, reach‐scale effects are unknown. This study adds to the growing body of knowledge about responses of aquatic organisms to large floods, although quantification of recolonisation and fate of displaced mussels are needed to fully understand long‐term effects of large floods on mussel communities.

Except where otherwise noted, this item's license is described as Attribution-ShareAlike 4.0 International