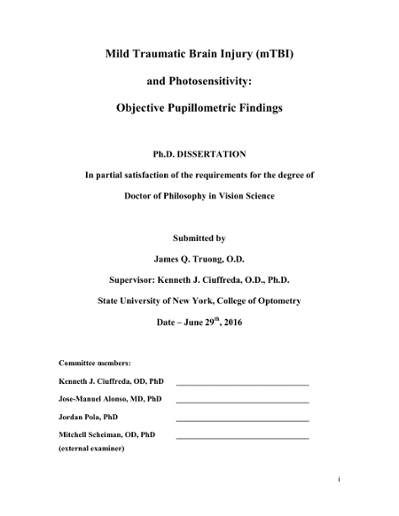 Background Given the extensive neural network of the human, binocular, pupillary system including its sympathetic and parasympathetic innervation, it is plausible that a mild traumatic brain injury (mTBI) could compromise pupillary control, thus causing pupillary asymmetry and dysfunction. Furthermore, presence of such pupillary abnormalities could exacerbate mTBI-related visual symptomatology, such as photosensitivity. There have only been two studies in the area, and they both used monocular pupillometry with only one test condition; hence they were limited. Furthermore, their results were in part equivocal. There remain many unanswered questions (i.e., gaps) in this important field of study including: 1) does mTBI affect the pupillary light reflex (PLR)?, 2) is there an increase in inter-ocular pupillary asymmetry (IOPA) in mTBI?, and 3) are there PLR differences related to one of the most prominent and prevalent dysfunctions resulting from mTBI, namely photosensitivity? Aim The overall aim of the present dissertation was twofold. First, to evaluate comprehensively the effect of mTBI on the human pupillary system, and furthermore to determine if pupillometry could be used as an objective visual biomarker for mTBI. Second, to evaluate comprehensively the effect of photosensitivity on the human pupillary system, and furthermore to determine if pupillometry could be used as an objective biomarker for photosensitivity. Methods The binocular pupillary light reflex was evaluated in mTBI, and it was compared to normal individuals, with and without photosensitivity, under a range of test conditions. Nine pupillary parameters (maximum, minimum, and final pupillary diameter; latency; amplitude; and peak and average constriction and dilation velocities) and 6 stimulus conditions (dim pulse, dim step, bright pulse, bright step, bright red step, and bright blue step) were assessed in 32 adults with mTBI (21-60 years of age) and compared to 40 normals (22-56 years of age). The Neuroptics, infrared, DP-2000 binocular pupillometer was used (30Hz sampling rate; 0.05mm resolution) with binocular stimulation and recording. Results and Discussion 1. Inter-ocular pupillary asymmetry: There were no statistical differences in either static or dynamic inter-ocular pupillary asymmetry (IOPA) between the normal and mTBI groups. Thus, the pupillary effects of mTBI appear to be symmetrical rather than asymmetrical in nature, which suggests post-chiasmal involvement. The mean average (across groups) static IOPA was 0.26 + 0.20mm or 4.17 + 3.29%. The mean average dynamic IOPA was dependent on the light stimulus condition, with the average across all test conditions and groups being 0.11 + 0.10mm or 1.84 + 1.70%. 2. Pupillometry in mTBI: mTBI has been reported to cause the pupillary light reflex (PLR) to be globally attenuated (i.e., slower in onset and more sluggish in response dynamics). The present results showed that there were many statistically significant differences (p < 0.05) in the PLR parameters between the mTBI and normal groups. Furthermore, different test conditions allowed for discrimination of different parameters between the two groups. For any of the given six test conditions, 5 to 8 of the 9 pupillary parameters were statistically different (p < 0.05) between the two groups. The overall trends revealed that the mTBI cohort had longer constriction latency, slower constriction and dilation velocities, and smaller pupillary diameters (baseline, minimum, and 6PSPD). The most consistent and robust pupillary parameters that differentiated between the two groups were the pupillary diameters (maximum, minimum, and 6SPSD; p < 0.01 under all 6 test conditions), and peak dilation velocity (p < 0.02, under all applicable conditions). This suggests that mTBI adversely affects both the sympathetic and parasympathetic systems, however, the effect appears to be greater on the sympathetic system. 3. Pupillometry in photosensitivity: There were statistically significant differences (p < 0.05) in the PLR parameters of those with versus without photosensitivity in both groups. Interestingly, these differences depended upon whether the photosensitivity was mTBI related. Those with mTBI and photosensitivity manifested six significant differences (p < 0.05) as compared with those with mTBI cohort without photosensitivity: larger baseline diameter, larger minimum diameter, faster peak dilation velocity, faster T50 and T75 recovery times, and a larger pupil diameter at 6 seconds post-stimulus. Normal (non-mTBI) subjects with photosensitivity exhibited four significant differences (p < 0.05) as compared with their normal cohort without photosensitivity: larger constriction amplitude, faster average constriction